Christmas Eve, and I'm nowhere, with no more coffee, no food to speak of, and only a couple horses and an injured, sullen kid for company.

We spent the day riding through the mesas, until finally we came into a valley with a river. 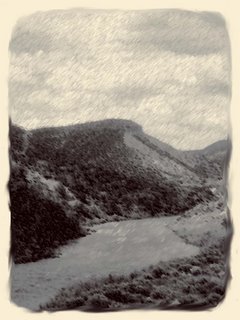 With no sign of inhabitants in the area and no place to cross, we watered the horses, cleaned Ishkin’s wound, which is inflamed and worries me, then headed south. We crossed the river at the first bridge we came to — a rickety thing that scared the horses even more than it did us. We hadn’t been across for long when Ishkin pulled up and said we had gone far enough for one day.

“They ain’t going to follow us all this way.”

“I was thinking we should continue until we find someplace where we can get food and medicine,” I told him.

He seemed unconcerned, and since he looked pale and tired, I decided he was right and maybe the best thing was to make camp where we were. Surely we would find a farm or village the next day, and who would refuse us food on Christmas?

It was a little early in the day to be hunting rabbits, and I really didn’t want to keep feeding Ishkin rabbit anyway, since it’s not very nutritious. I tossed a couple lines into the river to see if we could catch a fish. I didn’t expect to catch anything and I wasn’t disappointed. Once the rabbits came out I shot one, and then I boiled some pine needles and made Ishkin drink the resulting tea. He didn’t like it, but Auntie swore by it when we were in Unitas, and we were always healthy.

While we ate, I asked Ishkin if he had any family he missed, here on Christmas Eve. He only shrugged for answer, and said, “Do you?”

“I’ve got lots of family, and I miss them all.”

“If you’ve got family, why are you out here?”

“The ones who are kin to me are all dead. And the others—”

“How can you have family that’s not kin?”

“Time spent together makes people family. Sometimes they’re the best family of all. They love you because they want to, not because they have to.”

This was obviously a new idea to Ishkin and he picked at his rabbit haunch. “If you and I stay together long enough, would we be family?”

I think we were both a little embarrassed, because we didn’t talk any more for awhile. I let Ishkin rest while I cleaned our cups and dinner dishes in the cold river water. When I returned, he was still sitting near the fire, staring at the flames, lost in his own thoughts. “I’m reading an interesting book,” I offered. “Want to hear some of it?”

He shrugged in answer, and I brought out The Last of the Mohicans. Since I wasn’t going to get my percent back, I figured I might as well get my money’s worth. I went back to the first page of the first chapter and started reading. After awhile, Ishkin fell asleep. When I woke him so he could lie down in our shelter he felt a little warm, but I'm hoping it was just from being so long in front of the fire.

I stirred up the fire, added a little more wood, and now I’m trying not to let my memories bother me. I always miss my mother and grandparents at Christmas, and oddly, I miss the animals from our farm. I spent a lot of years thinking if Will and I could kill the man who was responsible for what everyone now calls the Valle Redondo Massacre, I would be at peace. But we killed Strecker this past summer, and if anything, I’ve felt worse ever since.

Now I have Will and Auntie to miss, too. And Robert. I promised all of them so many things, and I’ve let them all down.

What a mess I’ve made. I’m going to let this fire die down and go to bed. We don’t need to set a watch. If someone wants to kill me tonight, let them. I don’t care.

Bells woke me up. Church bells! They’re far away, but I can tell they’re somewhere to the south. It must be Midnight Mass. I don’t know why I’m so excited. I’m not religious and I wasn’t raised Catholic, but bells are such a wonderful, happy sound; it’s life, warmth, people, and redemption. It’s candles, food, kind people and pretty things. And it’s to the south and not very far at all.

I need to wake Ishkin up and tell him. It's too late and too far to go tonight, but I think we've got a Christmas Mass in our future!

And hopefully Christmas dinner, too. And not a trip to the hospital for Ishkin.

And hopefully Christmas dinner, too. And not a trip to the hospital for Ishkin.

Indulging in a bit of foreshadowing there?