This has been such a great day!

At breakfast I shared some of my coffee and chicory with my new friends. This went over well and when they saw I was drinking out of a bowl, someone gave me a cup. We also got an extra blanket in exchange for the rabbits I shot last night, so Ishkin and I are well on our way toward kitting him out decently.

After breakfast, a group of would-be arrow-makers took me to see their tools and supplies. I was surprised by how much they already had acquired. They had pitch, turkey feathers, blanks of various types and qualities of wood, some different types of tips, and the beginnings of a jig. They had tried to make some arrows on their own, but without a working jig, the shafts were unevenly planed, but that wasn't the least of their problems.

“A lot of them just won’t fly,” one man told me. When I looked at the arrow he handed me, I could see why.

“Feathers have a direction to them,” I explained. “You put a clockwise and a counter-clockwise feather on the same shaft, and it’s not going to work.”

And then there were the tips. Most were only good for target practice, while a few were big enough to bring down deer. “What kind of game are you after?” I asked. When they said mostly birds and rabbits, I showed them my own arrows. “Send some of your kids out to collect old bullet cartridges. Those will do fine for small game.”

Then I asked about the jig, and if there was a plane for it. Everyone got kind of weird, looking at each other like someone was guilty of something, but when I explained I don’t know how to make a straight shaft any other way, a couple of the men said they could maybe get a plane, and they left.

Since I still had several people standing around wanting to learn something, I selected the best of their shafts, handed out some feathers, and we got to work fletching. 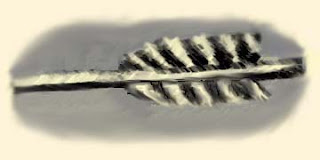 We took a break for lunch at mid-day, and afterward, I went for a walk. I had been told that there was a library in a room of the county courthouse, and I wanted to consult a map and find a book to read.

The library wasn’t much, just a small, cold room with books piled up along the walls. I guess wood and metal were too valuable to be used for bookcases. The lady in charge of the place gave me a funny look when I asked about maps, and pointed me to an enormous book called an atlas. It looked pretty good to me, but I was annoyed that the pages that would’ve shown the region I was in had been torn out. I guess someone needed a map and couldn’t get one any other way.

I looked at the maps of the area between here and Kentucky, tracing myself a new route, based on starting farther south. It’s beginning to look like the quickest way will be for me to cross Texas. I spent three years fighting Texans, so I’ve got some mixed feelings about that.

I think my destination in Kentucky will be Lexington. I don’t know anything about it, but it has a nice sound to it. And I found out that Baltimore is actually in Maryland, not Tennessee. If anyone asks again about Tennessee, I’ll say I’m going to Memphis.

After I got done with the atlas, I looked for a book to read. There were a lot of novels to choose from, but I think I found the perfect book. It’s called The Last of the Mohicans and it appears to be about Indians. Not the kind of Indians like around here, but some other kind, near Canada. The first chapter starts with a Shakespeare quote. This will make Auntie happy, so I’ll have to mention it in my next letter to her.

Now that I had a book to read, it occurred to me that maybe the library would have books about hunting and making arrows. It seems like the sort of thing the guys at the motel would’ve thought of, but maybe they don’t read very good. I looked all over the library, though, and found nothing about hunting. I've heard that in the early years of the century they used to print books about everything, but maybe that’s just a story people tell.

I took my book to the lady at the desk by the door, and asked to borrow it.

“I’m visiting a relative,” I said.

“Have them come back with you and bring their I.D. card.”

“It’s my grandmother, and she’s too sick,” I lied. “Is there no other way to borrow a book?”

The lady seemed annoyed. “You can buy it. Return it in a week and we’ll give you back eighty percent.”

I wasn’t sure what she meant by percent, but I was afraid to look stupid. I handed her the book. “How much?”

That was more than I wanted to pay for a book, even if they would give me back a percent. “Do you take federal?”

“United States dollars?” She looked at me like I was offering to pay in snakes, which probably would’ve been more useful, but when she saw I was serious, she said, “A hundred dollars.”

I smoothed some dirty paper bills from my pocket and handed them over.

She made some notes in a book, then handed me The Last of the Mohicans. “Bring it back in a week and you’ll get back eighty dollars. Otherwise, there’s no refund.”

So that was what she meant by percent. I took the book, thanked her and headed back to the motel.

Everyone was waiting for me. “We thought something happened to you,” one man said.

The woman who had told me about the library was sitting nearby with her head down, like she was embarrassed about something.

“Well, just be careful,” another man said. “We don’t recommend going toward the center of town, where all the government is.”

“Why not? Seems like they keep good order here.”

“Just do as we say. It would really be better if you stayed here.”

This made me mad. They were willing to hang on my every word when they wanted me to teach them stuff, but as soon as I ventured beyond the courtyard, they thought I was no better able to care for myself than a sheltered twentieth century girl.

I put my book away, and while one man worked on getting the plane he had found hooked up to the jig, I took everyone who was interested behind the motel to practice with the arrows we had fletched that morning. 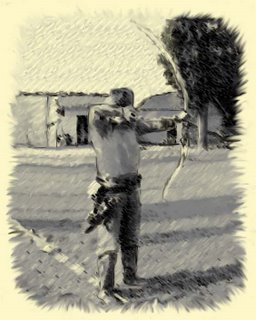 By the time we were done with archery practice, I was feeling a little better.

Dinner was good tonight—bean soup. The lady who had told me about the library gave me an extra bowl and spoon, so now Ishkin and I each have our own.

Tonight before turning in, I read a little of my new book by the light of a candle. There’s a blonde girl in the book, who made me think of my friend Macy in Unitas. It made me sad, because I don’t have any female friends out here on my own, but there was a girl near my own age in the arrow-making group this morning and I saw her again at dinner. I think I’ll talk to her tomorrow.

Kind of settling in, eh? First thing I'd want to know is which ways the local authorities are abusing their authority.