This morning I tried to make friends with Clara. She’s kind of pretty, although thin and dirty, like everyone else around here. But I’m probably dirty, too, so who am I to judge? I wonder when laundry day is at this place? As much as I hate doing the wash, my clothes really need it.

What’s really interesting about Clara is her hair, which she is constantly re-styling. I think it's her way of trying to make herself pretty, since her clothes are so bad, but every time I see her fancy hairstyles I wonder if she’s about to go on a spy mission. In Unitas, that was the only time we girls ever did anything with our hair. The rest of the time we kept it braided so it wouldn’t get tangled during training or operations.

I took some of the paint we have here for the arrows, and made this picture of Clara. It’s not very good, but I was mostly trying to get a picture of her hair. This is my favorite style so far but it wouldn’t surprise me if she changes it by this afternoon: 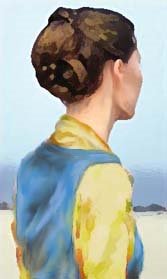 I thought I was getting nowhere trying to befriend Clara. She seemed sullen, and answered my questions with as few words as possible, but after this morning’s class where we made some arrow shafts with the newly-finished jig, Clara surprised me by giving me a red hair ribbon. She said it was so I would have something nice for Christmas, but I put it in my hair right away, hoping it would speed our friendship along.

After lunch (leftover bean soup from last night), I decided to go downtown and mail a few Christmas messages, since this town is on the rail line. Auntie always made sure me and Will had presents at Christmas, no matter how bad our circumstances, so I thought I should at least make sure she knew I was safe, so she could have a good holiday. I tried to find Ishkin to go with me since everyone had been so worried about me going around town alone yesterday, but I couldn’t find him for anything.

I wrote a note for Auntie, and one for Will. I made sure to mention I had company on the road so they wouldn’t worry too much. I also made sure to say that I would not stay in this town through Christmas, even though that’s a lie. I won’t be through training these people until almost New Year’s, and it’s nice to be settled in a place for a little while, even though this motel is crowded and squalid.

When I got downtown I decided to go inside a shop: 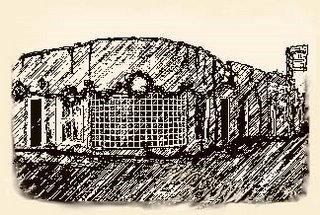 I wasn’t looking for anything in particular, just seeing what kinds of things this town had to offer, but when I saw some nice paper cards with paintings of Christmas things on them, I bought a few and put my letters inside them. I took the nicest of the cards, wrote in it very carefully, then put it in an envelope and addressed it to Robert. I have no idea if it will actually get to him. His town isn’t on a rail line, and I don’t have an address for his house, but he told me last summer that everyone in his town knows everyone else, so the card ought to reach him.

I mailed my letters at the train station, then started walking back to the motel. That was when I began to wonder if maybe the guys yesterday had been right that I shouldn’t be walking around by myself. I felt like people were watching me, and not in a good way. It was creepy, and I was glad to get back to the motel and start the archery lessons.

Tonight after dinner, Clara came to the room I share with Ishkin. She said she had seen me painting her picture earlier today. I was embarrassed and tried to explain about her hair (which was in a new style), but everything I said sounded stupid. Just when I thought I was going to die of embarrassment, she handed me this: 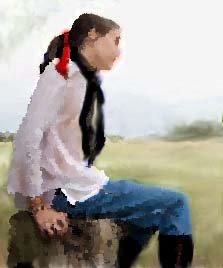 It’s supposed to be me, watching the archery practice. I don’t think it looks much like me, except for the red ribbon. My clothes look way too clean. But Ishkin says it’s a good picture, and it was nice of Clara to try.

Clara didn’t stay long. I think she felt uncomfortable. Maybe she’s not used to having friends. But I feel a lot happier tonight. The only problem is that I regret having sent those letters, now. If I’m going to make a friend, it would be nice if I could stay awhile.

And the mystery of what's wrong with this town continues.