We’re back on the road, and once again we’re not headed in a direction I ever intended on going.

It wasn’t easy for me to get information out of Clara last night. I practically had to threaten her. But once I’d gotten her to tell me everything, she was so embarrassed at the role she had played in the whole mess that she helped me and Ishkin sneak away while everyone else slept. Even so, I didn't tell her where we were going. I said we’d be staying on the highway to the southwest, but once we were on our way we went off the road and made our own trail west.

Honestly, I didn’t know what else to do. Due south would’ve taken us onto the plains, where we could've easily been seen. North or northwest would've taken us to the dam, which was the main objective of the rebels I had been helping. No way were we going east, since that was out of Ishkin’s way, and sticking to the highway would’ve made it too easy for someone to come after us. That left no other choice but west. 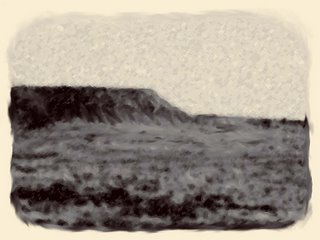 By the time the sun came up, a front was moving in and it started getting colder, with a light snow. I would’ve liked to have made camp, built a fire and gotten some sleep, and I’m sure that went double for Ishkin, but we were in the mesas and we knew that the deeper we went into the twists and turns of the passes, the harder it would be for anyone to come after us. It was rough country and it slowed us down, but the snow wasn’t sticking in most areas, so we left few tracks. The more we lost ourselves in the cliffs and ravines, the more I could relax. It wasn’t likely we would be pursued this far.

We didn’t have much food with us, but we had water from patches of snow and the occasional stream or arroyo. When we finally decided to make camp, I let Ishkin practice the bow and arrow skills he had learned over the last few days by getting us a rabbit. Trying to revive our joke from several days ago, I called him Mataconejos, but he was functioning on that nervous energy that speaks of pure exhaustion and he didn’t care what I called him. Well, I was tired too, and it was a dumb joke, anyway.

I fell asleep right after dinner, but Ishkin stayed up and stood watch. He woke me a little while ago for my turn, so now I’m sitting here by the fire, thinking about those people I was helping.

Their plot was simple enough. Whoever controls the dam northwest of town can control just about everything, so they were going to take it over. The motel housed one of several cells involved in the plot, and they had been under suspicion for a long time, but since they couldn’t get proper weapons, the government preferred to wait them out. When people are sick and hungry enough, they give in. The pandemic, resource wars and civil wars have so depopulated some areas that it does the government no good to kill or jail anyone. Hunger, thirst, and basic medical needs eventually bring people around.

Would the plan to attack the dam have worked? I have no idea. Strategy isn’t my forte, and even if it was, I haven’t seen the dam and have no idea what would be required to take it over. I have a feeling the people I left behind will keep trying, though. They’re obviously committed, since they see nothing wrong with endangering the life of an innocent person, if it will further their ends.

I want no part in politics or rebellions. I just want to get to a place where I can enjoy a peaceful life. Why is that so hard?