Merry Christmas, and a luxurious one it is!

We headed south as soon as there was enough light to see by, searching for the church whose bells we heard last night. It didn’t take long to come to a field of free-range goats, some of them scavenging for patchy remnants of weeds while others clustered around a shelter where someone had recently set out some hay. We gave a wide berth to the dogs minding the flock and continued on, confident we were near civilization.

Finally we came to a village. It didn’t look like much. There was obviously a road, now covered over with dirt and weeds, and there were a lot of deserted buildings. The few that were inhabited were clustered near the church which needed some plaster, but at least wasn’t falling apart like some churches I’ve seen over the years. 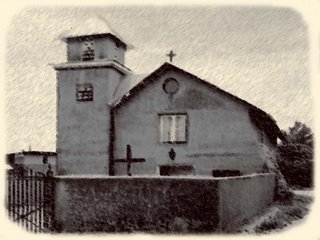 We pulled our horses up and debated what to do. While we were discussing, a few people came out of the houses and started walking toward the church. They looked at us oddly as we got down from our horses and followed them inside. A woman murmured something to a little girl and she scampered off, returning in a minute with a grandmotherly lady who looked at me and Ishkin, taking in our bedraggled state and dirty clothes. She seemed none too impressed with me, but something about Ishkin made her smile. Ishkin had the good sense to smile back, and soon we were explaining to “Mama Norma” as she asked us to call her, who we were and what we wanted.

“We heard the bells last night,” I said. “We came to hear Christmas Mass and maybe buy or work for a little food afterwards.”

“And I would like to light some candles and pray for my family,” Ishkin added. This was the first he had ever said about having a family, and I had recently begun to wonder if he had hatched from an egg in the sand like a lizard.

“Of course, mi hijito. Vén.” Mama Norma led him to a niche full of flickering candles in green and red glasses. I hung back at first but she waved me forward too and I lit a few candles, thinking of my loved ones and finding the old-fashioned ritual oddly comforting.

By then the bells were ringing and a few more people had trickled into the church. Mama Norma encouraged us to find a pew. To our surprise, she was the one performing the Mass that morning. I’m pretty sure it wasn’t correct from a Catholic viewpoint, although I don’t keep up with religion, so maybe women priests are okay now. More likely, there just wasn’t a proper priest to be had. During the resource wars, the countryside was full of priests and ministers, since religion was one of the few ways a young man could get out of being shipped off to fight. But since the Feds abandoned this region, most young men, even the religious ones, have gotten caught up in the civil wars, leaving a lot of churches without leadership.

After Mass, Mama Norma insisted Ishkin and I join her family for Christmas dinner, so we followed her to an adobe house populated by women and children. I was curious where the men and boys were, but was afraid to ask. From the way Mama Norma kept darting sad little looks at Ishkin, I suspected there was a tragedy about this place that no one was telling us.

That didn’t stop us from having a wonderful Christmas dinner of cabrito, potatoes, calabaza, posole, and fresh corn tortillas. Ishkin and I were both out of the habit of having so much food all at once, so when we saw the dessert of apple empanadas and baked custard, we wished we had extra stomachs like a cow. We found a way, though, and while Ishkin dozed in front of the living room fire afterward, his belly straining the buttons of his shirt, I roused myself to help with the dishes.

There were several of us in the kitchen: Mama Norma, her younger sister, a cousin, and some young girls ranging in age from about three to one who looked to be near Ishkin’s age. The girls proved more trouble than help and Mama Norma sent them away. I hardly felt like I qualified to be left with the grown women, but I made a point of taking all the tasks requiring physical strength. I figured doing the hardest work was my duty, since Ishkin and I hadn’t yet been asked to do anything in return for such a generous meal, and I still hoped to get an offer of a spot on the floor to sleep on.

The women engaged in idle chit-chat as they worked and didn’t ask me any questions until we were nearly through, when the cousin, in a slightly suspicious tone, asked me why I wasn’t spending Christmas with my family. That was the last topic I wanted to get into, so I did something I rarely do: I made a play for sympathy. “My father was killed in the Resource Wars,” I said. “The rest of my family died in Valle Redondo.” Thankfully, the cousin had the good grace to be embarrassed, and after everyone murmured the appropriate sympathies, they left me in peace.

By now it was mid-afternoon, and I was at a bit of a loss what to do with the rest of the day. Should I wake Ishkin up, saddle our horses and move on, or would we be allowed to spend the night? I dearly wanted to stay. A light snow was starting to fall, and the living room with its cozy fire and colorful Indian blankets was tempting. With a little encouragement, I would have curled up like a cat and gone to sleep. Instead, Mama Norma asked if me and Ishkin would like to take baths. Her house had an indoor tub with a water pump, and she put a few kettles on the stove so she could add hot water to the cold and take the chill off. I gratefully took a bath and washed my hair. When Mama Norma’s sister brought me a robe, I washed my clothes. Then we re-filled the tub and woke Ishkin, and while he sat in front of the fire after his bath, wrapped in a blanket and ignoring the stares and giggles of the little girls, I washed his clothes, too.

I scarcely had energy left at this point, but I went back into the living room after hanging Ishkin’s clothes to dry, and found the women and the oldest girl busy knitting and mending. I joined them for awhile, but when they saw me nodding off over one of the girls’ socks, they took pity on me. To my surprise, Mama Norma didn’t make up pallets for us on the floor or in the barn, but instead gave us real beds in what she called her “guest room.” I could hardly focus my eyes, I was so sleepy, so I hope she understood that my inadequate jumble of words was meant in deepest gratitude.

I slept for several hours and woke up in plena noche, the room completely dark. I couldn’t figure out where I was at first, and my mind raced through several incorrect scenarios, from home in Valle Redondo, to Auntie and Miguel’s place in the mountains, and every possibility in between. But eventually I figured it out and fumbled on the nightstand for a light. I found a little solar lantern and turned it on. Nearby, on the floor, was my bag of belongings. Now that I’ve written about today, I’m going to read my book for a little while, until I fall back asleep.

It’s been a nice Christmas, and so much better than I had reason to expect. It just goes to show that you can never be sure what’s going to happen, and in spite of everything, there remains a lot of good in the world.

This is nice, and I'm glad she caught a break, but you know I'm looking for Vince.

She'll meet Vince on New Year's Day (Day 22). As I said before, you won't offend me if you jump ahead. There's a one-to-one correlation between "diary entries" and the calendar, though. If you read an entry per day, you'll meet Vince on the same day Diana does.