I woke up and saw it had snowed during the night. I wanted to build a fire and warm up, but with a refugee camp nearby, I was afraid someone might see the smoke and investigate. Since I’ve got a horse and money, I couldn’t take that chance, and it wasn’t like I could make any coffee. Yeah, I was still mad about that.

I got Flecha loaded up and went looking for the town. I had to go all the way around the camp, but when I found the railroad tracks, it got easier. There were two roads to town. One went along the tracks and the other curved around the other way. Since I wasn’t sure what kind of place it was, I took the back road. 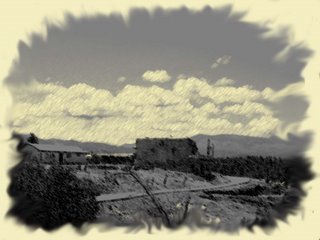 The town was a disappointment. I asked the first person I saw what was the name of the place, and she said Ciudad Pacheco. I almost started laughing. Even calling it a village was too generous, but a city? It was just a short path between a few buildings. At least I know who’s in charge of it, though. I don’t know what it was called before, but Coffee-Thief’s boss went and named it after himself, and I guess I can assume Don Pacheco is the sponsor of the camp, so he’s probably got big plans. Maybe in spring they’re going to put up some more buildings in town and the refugees will all move in like regular citizens. It still won’t be a ciudad, but maybe it will at least look like a town.

Ciudad Pacheco had a small store, but no coffee for sale. The shop owner said they hadn’t been able to get any for a couple months. The next best thing the guy was selling was chicory, so I bought some of that, and asked if there was anyone in town who needed help with chores in exchange for a meal. He said no, they had all the free help they needed from the refugee camp, so I bought some food, too. And since I was already spending money, I asked how much it cost to send a letter to Estrella on the train. It wasn’t much, so I found a place to sit down and write a couple letters.

The first was to Auntie. That was the easy one. I told her where I was, that I was safe, and not to bother replying because I wouldn’t be here after today. Then I wrote to Will. It was the hardest thing I’ve ever tried to write. I wasted three sheets of paper and almost gave up. Except for the time I spent at the safe house, I’ve been with him nearly every day of my life since I was ten. I owed him an explanation for what I’d done, so I finally got some words written. I’m embarrassed to remember them now, they seem so stupid and not at all what I really meant to say, but sometimes there just aren’t any right words and you have to go with what you’ve got and hope the person reading it will understand.

When I was done, I gave the guy at the counter my letters and some money, since he seemed to be in charge of all the business of the village. He saw the names on the letters and frowned. “William Channing? El Valiente Guillermo?”

I held my breath, knowing what would come next. I should’ve put that letter inside the one to Aunt Amalia. I didn’t need this.

He pushed the coins back to me. “No charge, Bella Diana.”

I would’ve given the coins back and doubled them if it would’ve wiped the knowing smirk from his face. It occurred to me that it wasn’t too late to meet Robert like I had promised, and tell him just what I think of him for promoting that stupid song about me and Will.

Since the man was still looking at me, I said, “It’s not true, you know. Guillermo no es mi hermano. He’s not blood kin of any kind. It’s all just a nasty rumor.”

“Por cierto.” He put the letters into a bag, still with that irritating little smile on his face. “So what brings you to Ciudad Pacheco?”

I hadn’t expected to be challenged. I tried to remember what I knew about United States geography, but I’ve never been to school and I only studied enough of the map to figure out how to get to Kentucky. “Baltimore,” I told him.

Right away I could tell I had made a mistake, but the man was nice about it. “Por cierto, Bella Diana.”

The man’s little shop hadn’t gotten any warmer, but all of a sudden it sure felt hot in there. But to my surprise, he didn’t ask any more questions. I guess he saw how red my face was and felt bad. Instead he smiled, for real this time, and told me to wait. He went into a back room and returned with a little cloth bag. I could smell what it was from across the counter.

“I had to check with la esposa,” he said. “It seems we have a little coffee, after all.”

He was lying, but I gladly paid his price.

As I was leaving, he called after me, “Have a good time in Baltimore, Tennessee!”

Bastard. I need to either get a good map or learn to keep my mouth shut.

Nashville's country music industry must have died in the crash had Diana never heard of Tennessee's most well-known city.

LOL. I kind of like to see her squirm.

I still think she's a coward for the way she treated Will.