What a beautiful morning! Cold, with only a little bit of snow under the trees. It should be colder at this time of year, but I’m glad it’s not.

I stirred up the fire, set some more branches on, and started some coffee boiling. I didn’t bring much coffee with me, so I wonder how much luck I’ll have finding more? I guess after today I’ll have to be more careful with it.

Since it’s such a nice morning, and I’ve got no place to be, I’m going to see if I can draw a picture of the chipmunk that’s been watching me while I wait for my coffee. I’ve already tossed him a few piñones, so I think he likes me. Now if he’ll only stay still. 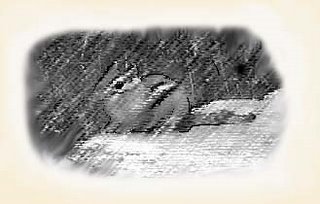 It's an hour later now, and so much for my peaceful morning. I was drinking my coffee, drawing the chipmunk, and all of a sudden Flecha started acting nervous. I grabbed my rifle and stood up, thinking it might be an animal, but then I heard the sound of a horse’s hooves. Since it sounded like only one rider, I felt a little better.

When the man came into the clearing, I was ready, but he didn’t seem intimidated at all. He just touched his hat and said, ”Buenos dias, Señorita.” He went on to explain to me, in a very stern voice, that I was on private property belonging to some Don Pacheco. I had never heard of this particular don, but I know what their kind in the south are like — big-headed Hispanos, obsessed with restoring the boundaries of the old landholdings granted by the King of Spain nearly five hundred years ago. Pretty crazy, but my father was from one of those old families, so I can usually pass among them without much trouble.

I lowered my gun and apologized for trespassing, doing my best to mimic his northern mountain accent. I figured he’d go easier on me if he thought I was one of them. I said I was only passing through, I had hunted no game on Don Pacheco’s mountain, and had only used a little wood and water. I pretended like Don Pacheco’s hospitality was a given. ”Por favor, déle mis gracias por su generosidad.”

I thought being polite and humble would be enough, but I was wrong. The man said there was a fee to use Don Pacheco’s land, even if it was just for a single night’s camping. I denied having any money, keeping my hand on my gun in case he thought he could ask for favors, instead. But no, he looked at my coffee pot with an expression that said it all. Bastard. He let me keep the coffee pot, but took my little bag of ground coffee beans. As he rode away, I was tempted to shoot him, but the whole reason I don’t want to go back to my military unit is because I’m tired of killing people, and I’m not going to get started with that again. Not over coffee, at least.

After the cabrón left, I tracked him a little ways on foot, just to make sure he really was going on about his business of robbing campers, and not hiding a little ways up the road to attack me later. By the time I got back to camp, the fire had died down and my coffee was cold. I didn’t feel like stirring up the fire again, so I drank the coffee as it was, since I don’t know when I’ll get more. Then I broke camp and headed down the mountain.

Other than some old mobile homes, collapsed and in ruins, I didn’t see much else until late in the day when I came over a rise and saw a bunch of tents in the distance, and the smoke of cooking fires. A refugee camp. I figured I’d better stay away, since I don’t know who is sponsoring the camp and if my horse and goods would be safe. But the camp is a good sign in one way. It means there must be a railroad and a town of some sort nearby.

Since it was too late in the day to go looking for the railroad, I found a place to make a camp and got settled in. I hope I’m not still on Don Pacheco’s land. I wonder if he’s sponsoring the refugee camp? That would mean he’s a pretty powerful guy, if he is. But I never heard of him from any of the locals who worked with Auntie at the school. I’m starting to get curious now.

When I find the town that supplies the refugee camp, I’ll ask around. I hope there’s a store that has coffee for sale.

That attachment to coffee is the reason I first backed away from the stuff. I started liking it too much. Still, I feel her inclination to shoot the guy as he road away.