I had an awful time getting Ishkin on his horse today. He wasn’t resisting me on purpose, but he jerked and flailed, arched his back and grimaced horribly throughout the ordeal. I could tell from his eyes he was mortified at causing so much trouble, so I tried to stay calm and not react, even when he kicked me in the head. There was an old cart in the barn, and I looked at it again and again, wishing we were on a road or on the flat plain, where it would maybe be of use.

“I’m sorry,” I said, once I finally had Ishkin lashed to his horse. “Until we get onto flat ground, there’s just no other way.”

Clearly we had no choice but to make for the Interstate by the quickest and easiest route possible. Mama Norma had told me about a road that would lead us due south, so as we set out, I kept my eyes open.

We found the road by mid-morning, but the going didn’t get much easier. These roads from the twentieth century aren’t very good. They’re made of a grainy black rock that breaks and develops holes without constant repair. In most areas, especially in the valleys, the roads have long since become covered with dirt and sand. This is good, because it smooths them out and makes it possible to drive carts over them. But in the mountains, the roads are broken in such jagged pieces that even being covered over with dirt doesn’t help much.

Just before noon we came upon a farmhouse. It was a sorry looking place, but I stopped anyway. Ishkin needed food. 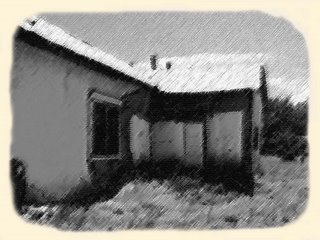 The woman who answered my knock was thin, with a quick smile that suggested she wasn’t nearly as old as her wrinkles implied. I explained my dilemma, and she nodded. “You’re welcome to bring him in here to warm up.”

I appreciated her offer, but I was afraid if I took him off the horse, I’d never get him on again. “We have to keep moving,” I explained. “I want to make the interstate before the sun sets.”

The woman called to someone in the house. “Elise, mix up some of that yogurt with water and honey and bring it here. And mix an egg in it, too.”

A few minutes later, a girl came to the door, holding a frothy mixture in a metal cup. She peered around us, trying to see what all the fuss was about. “What’s wrong with him? Is he going to drink this?”

“What’s wrong with him is what’ll happen to you if you aren’t more careful in the barn,” the woman said. “Now hand the nice lady the drink.”

“He’s going to spill it on himself,” Elise said. She darted back into the shadows and returned with a stool. “Let me past, Grandma, you’re in the way.”

The woman stepped aside. Our eyes met and she smiled slightly. “Nine years old and knows it all.”

“I do not!” came Elise’s voice. She was by the fence now, looking from Ishkin to the stool, calculating things in her mind. She turned to me. “If you tie the horse to the fence post. . .”

She proceeded to give me an entire run-down of her plan. It was what I had been planning to do anyway, but she had so much enthusiasm for the project that it was hard not to laugh. I gave “Grandma” a reassuring smile and together me and Elise managed to get most of the yogurt-egg mixture down Ishkin’s throat without him choking on it.

“Pobrecito,” she said, watching without a trace of revulsion while I wiped Ishkin’s twitching face. “He’ll get better, won’t he?”

“I’m taking him to a hospital,” I said. “Hopefully they’ll have the right medicine to make him well.”

I climbed down from the stool and made to pick it up, but Elise took it out of my hands. “What if they don’t have the right medicine?” she said in a softer voice, when we were nearly to the house and out of earshot.

“He’ll either live or he’ll die.” At the look of concern on her face, I added, “But the kindness of people like you helps a lot. He can’t eat regular food and he’ll die for sure without food.”

This answer seemed to make her happy and she took the stool back into the house. I dug in my pocket for the silver coins I kept handy. I held them out to the woman. “I’d like to compensate you for your generosity.”

Usually these country people won’t accept payment for food, but to my surprise, “Grandma” took one of my offered coins. She blushed and looked at the ground. “I’m sorry, but I’m all my granddaughter has in the world, and I won’t be around forever. This farm is poor, and her only opportunities will be in a town. She’ll need money when the time comes.”

“Take them both, then.” I pressed the other coin in her hand and gave her a hug.

As we were leaving, Elise ran to the gate and stood for a long time waving to us as we made our way down the road. Her enthusiasm was contagious. She reminded me so much of myself at that age that it put me in a nostalgic mood as we picked our way along the pitted road.

Finally we could see the long flat ribbon of the interstate in the distance. We saw people, animals and wagons moving back and forth, but from where we were, there was no way of knowing just what this signified.

“I think we better camp here for the night,” I told Ishkin. “We need to get a better idea what kind of people these are, and how safe we’ll be. And besides, I need to find some poles or long tree branches so I can make a travois. You won’t have to ride a horse again until you’re well. I promise.”

We’re camped tonight within sight of the Interstate. I hope we’ll make good time tomorrow. As much as I fear what we’ll encounter in the city, it’s Ishkin’s best hope.

Talk about dire straights. I hope he will be ok. Knowing you, he'll probably die, but I can still hope. :)

Hey, what kind of meanie author do you think I am? ;-)

But... everything I've read from you so far has been apocalyptic. You're supposed to be mean.