This morning I went looking for something to make a travois with. I hated to leave Ishkin alone, but I didn’t have much choice. There was no way I was going to get him on a horse today. I searched the area behind the tree line for awhile and finally found a cluster of old buildings where I was able to find some poles that would serve my purpose. Getting them back to camp was tricky, but once I returned, I had an even bigger problem on my hands.

My plan was to make a very basic travois and have Ishkin’s horse pull it. But by noon, when I was ready to hook the contraption up, his mare would have none of it. She stomped and skittered, then bucked and tried to kick the poles. No way was she going to pull it.

So my poor, patient Flecha became a pack animal. 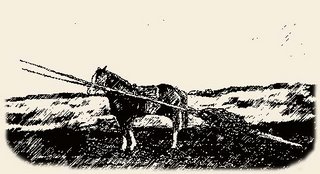 I tied Ishkin into the travois, wrapped in both our blankets, and with a few hot stones among the folds to help keep him warm. I tied Flecha’s reins to Ishkin’s horse, checked that I had my money hidden and all my weapons in plain view, and then we set off across the flat scrub toward the Interstate.

We paused on the side of the road, considering. There wasn’t much traffic today, and it seemed to consist mostly of donkey carts and tired-looking people on foot. A mule team went by, pulling a heavy wagon and surrounded by armed guards on horseback. There wasn’t much point in wondering what they were carrying. Anything from drugs and ammo to beans and strings of dried pumpkin would’ve merited an escort. The thought that the wagon might contain food made my stomach growl. I had run through most of the food Mama Norma had given us, and was trying to hold onto the last of it as long as I could.

Since the traffic looked harmless, we moved out onto the road and started heading west. The going was faster than in the mountains, even with the cumbersome travois, since we were on a plain and the road was free of large rocks. Still, even though the other travelers seemed harmless, I kept my eyes open for a group we could join.

Around mid-afternoon, we found our group. They seemed an unpromising lot at first — five ragged people huddled in blankets at the side of the road, surrounded by bundles. Two were children, one an infant, and one an old woman. Since I didn’t immediately see any animals or men, I was ready to keep on moving. 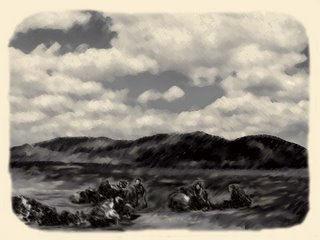 But then I saw a man a small distance away, laboring over a broken cart, with a pair of donkeys foraging nearby. The man looked young and strong enough to perhaps be good in a fight, so I pulled off the road, got off Ishkin’s horse, and went to talk to him. He said his name was Luke, and he and his family were traveling to California. That sounded like pure foolishness to me, but I didn’t tell him so. Instead, I asked if he needed help fixing his cart.

We did our best, but after an hour, we both agreed that it was a hopeless case. “How about we make a travois, like what I’m using?” I offered.

We had no poles, but Luke had plenty of tools, so we stripped what we could use off the cart, split and nailed pieces together, and ended up with not one, but two travois—one for each of the little burros. I was skeptical that these cobbled contraptions would hold together, but Luke was philosophical. “They only need to work until we can find proper poles. And they’ll only be carrying our food, gear, and the baby. Everyone else walks.”

By now it was too late in the day to take to the road, so I made a shelter for Ishkin near the tents the women had put up around their campfire. I dosed Ishkin with our rapidly diminishing medicines and tried to feed him a little soup from the evening’s dinner. The family said they were from Arkansas, and they seemed nice enough. I've never eaten with foreigners before, but they had nice manners, were generous with their food, and talked with a funny accent that reminded me of the Texan girls who me and Will did a joint mission with once.

No one seemed to think it was strange that I wanted to stay up and write, although the girl hung around for awhile, looking over my shoulder. Either she can’t read, or what I write bores her, because she soon went to bed. I should do the same.

I don't think it's strange at all that she wants to stay up and write.