We went into the valley today. From the mountain road, I could see the buildings and ruins spread out across the valley floor, and I wondered how I would ever find a hospital.I must have looked dismayed, because Margie said, “There should be signs. If not, head toward the biggest buildings. There’s sure to be a hospital over there.”

We soon found ourselves in a vast expanse of low buildings in various states of disrepair. Like in the mountain pass, the best of these were being used as shops and markets, and when we came upon one that offered wagons for sale, we stopped so Luke could haggle with the proprietor. He took the children with him, I guess in the hope that he would look more sympathetic, and after a bit, he returned pulling a small cart, while the children pushed it from behind.

To my surprise, he said we would put Ishkin in the cart. I protested, but he was firm. “We’re going to make sure you find a hospital. We needed a proper cart, anyway.”

We hitched the cart to Luke’s donkeys and moved all his family’s goods into my travois, and off we went with Ishkin riding in style, although he was probably in too much pain to appreciate it.

We headed toward the big buildings we had seen from the mountain, tracking through burnt-out areas and places that were leveled to foundations and scraps of concrete from bombs and fighting. As we got nearer the river and downtown, we started seeing signs, just like Margie had said. We stopped to ask directions when we lost the trail of the signs, distracted by the street urchins, teenage gangs, bicycle rickshaws and mule teams passing through. Some of the streets were blocked by garbage, dead horses or fallen light poles and signs. One street was barricaded by a group of dirty young women who waved guns and shouted at us.

Finally we picked up the trail of the hospital signs again, and eventually came upon a big building with a sort of tunnel where you could pull your wagon up to the door and take your patient out without them getting rain or snow on them in bad weather.

By now Ishkin had lost so much weight that Luke could carry him easily in his arms, so we went inside while Margie and the others stayed with the gear and animals. We found ourselves in a big room with fresh plaster on the walls, but dirty floors and broken chairs. There was a line of people in front of a counter, and Luke seemed to know that this was where we were supposed to go. I felt bad for him having to hold Ishkin while we waited, but there was no way we could put him on that filthy floor. We waited so long that I finally went back outside and got one of my tarps. We spread the tarp on the floor, put Ishkin on it, and dragged it with us whenever the line moved.

We got to the head of the line, and now I had a new problem. The clerk wanted information about Ishkin, his family, where he lived, and things like that. Of course, I knew nothing and he was in no condition to tell me, so I gave the clerk the name Ishkin Channing and said he was my brother. But when I said we were strangers and had no home, she got weird. “This isn’t a charity hospital, you know.”

“Is there a charity hospital in this town?” Luke asked.

Before the clerk could answer, a woman behind us said, “If you want that kid to live, don’t even think of taking him to anyplace that calls itself a charity hospital.”

“How much does this place cost?” I asked the clerk.

“Depends on what they need to do.” She made a few marks on the paper she was filling out. “I’ll put you down for ‘pay as you go,’ understand? No money, no treatment.”

I nodded, thinking of the two gold pieces I was carrying. It was all the money I had left and it was supposed to last me until I got to Kentucky.

Once we had Ishkin registered, we waited again, this time sitting with Ishkin on the tarp, since all the usable chairs were full. A few ragged children wandered the waiting room, offering drinks and snacks. Luke kindly bought me a little bag of dried apples. Finally Ishkin’s name was called and we took him into an even more unappealing room, full of dirty beds and strange equipment. There were electric lights back here, and some of the equipment was electrical too, and I had a hard time not being distracted by it all.

A nurse came over and directed us to put Ishkin on one of the beds. She did a few things to him, asked me some questions, then said to go back to the waiting room and she would call me when they had a prognosis.

Out in the waiting room, I told Luke there was no need for him and his family to stay any longer. We went outside and found that Margie had already transferred their goods into the cart, so all that was left was for me to wish them farewell. As a parting gift, Luke gave me a silver coin to tip the man guarding the lot full of animals and bicycles, and then they were gone, off to California, if that was where they were really going. I think they must have had money back in Arkansas, or maybe they found some along the way, because although they weren’t ones to waste money on foolish things like chocolate, they seemed to have cash whenever it really mattered. I hope wherever they're going, it works out for them.

I tied Flecha and Ishkin’s horse to one of the hitching rails, tipped the guard as Luke had instructed, and went back inside to wait. It seemed to take forever, but finally the nurse called my name and I went to join her and a doctor by Ishkin’s bed. The doctor talked to me like I was stupid, and told me only the obvious thing, that Ishkin had tetanus and would die without proper medication.

He mumbled and wrote some things on a piece of paper. “The prices change all the time, and billing isn’t my job.”

He sighed as if I was a nuisance, and quoted a number.

“That’s a lot.” I had it, but I sure didn’t want to spend that much if I didn’t have to. “How’s a person supposed to get that kind of money?”

This time he gave me a funny look. “Lots of things are for sale in the city. Buy yourself a dress and clean yourself up a little, and I bet you can find a way to get the money.”

If Iskin hadn’t need a cure so desperately, I would’ve considered shooting the doctor right then and there. Not to kill him, of course, but just to scare him. Instead I rested my hand on top of my pistol. “Assault and armed robbery are more my style.”

“However you have to do it.” He handed the paper he had been writing on to the nurse and walked away.

The nurse gave me a sympathetic smile. She was an older woman, part Indian and part something else. “Doctors around here think they’re gods.”

“If you want to authorize treatment, take this back to the clerk and pay for at least the first day. After you’ve paid, we’ll take him to a room and start him on medication.”

“They’ll tell you, don’t worry, but we can't keep him here. This room is just for triage.”

I went to Ishkin’s bed, where he was twitching, his muscles bunched and pulling his limbs in bizarre directions. “I’m going to go pay now,” I said. “These nice people will take care of you, and after you’ve had your medicine, I’ll be back.”

I waited in another long line to pay, and parted with one of my gold pieces for Ishkin’s first two days, figuring that would give me time to think what to do next. With the change I got back, I bought a drink and a snack, then checked on the horses and tipped the guard again. He was so pleased at my generosity that he told me where I could get some hay and water for free, which made me happy. I was beginning to think there wasn’t anything free in the city, except the air, and if someone had approached me demanding a nickel per breath, I wouldn’t have been surprised.

The sun was going down before I was finally allowed to Ishkin’s room. It was up several dimly lit flights of stairs, and down a corridor. The room itself didn’t look so bad. It had a window, and although it was cold, there were several blankets on the bed. Ishkin was drowsy and glassy-eyed. He had a tube sticking out of his arm and was strapped into the bed so he wouldn't twitch himself onto the floor. I figured they must have given him something for the pain because his eyes had lost their desperate look. I sat in the chair beside the bed, held his hand and talked to him for a long time about nothing in particular until he seemed to fall asleep.

I was starting to doze off, myself, when a commotion outside the door brought me around. It was a sound of running feet and excited female voices. I stepped into the hallway and was nearly knocked down by a young nurse with pock-marked skin and a friendly smile. “The fireworks are about to start,” she said. “Come to the roof with us!”

I had never seen fireworks, although I had heard of them. Since Ishkin was asleep, I tagged after her up the dark stairs. “Why are there going to be fireworks?”

I hadn’t even noticed.

“It’s the first time we’ve had them in years,” a nurse behind me offered. “It’s a gift to the city by El Duque.”

“He thinks we won’t notice what a thieving bastard he is if he puts on a good show,” another voice said.

Amid the giggles that followed this statement, we pushed open a heavy steel door and found ourselves out under the night sky, standing on the flat roof of the building.

I followed the nurses to the edge of the roof and we stood in a huddle, stomping our feet from the cold and waiting. Finally we heard a whistling sound and then there was an explosion and a burst of color in the sky. I wanted to reach for my gun, as if I were back in the civil war, but the girls around me clapped and cooed and I found myself gazing up at the sky in amazement as it burst into color and sparkles all around me.

The nurse who had invited me smiled, her eyes on fire with delight. “Isn’t it beautiful?”

Oh, it was beautiful-- one of the most beautiful things I'd ever seen! I couldn’t wait to find a colored pencil or two and make a picture, so I would remember the moment always. 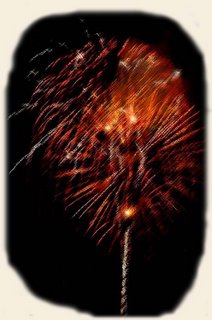