I sneaked out this morning while it was still dark, and now at mid-day, this is where I find myself: 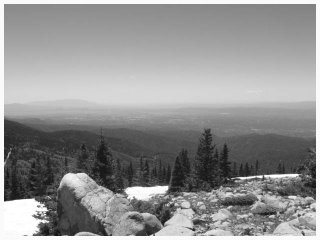 Yes, this is a real photograph. Photography is one of the things they teach at my Aunt Amalia’s school. I suppose I shouldn’t have taken any of Auntie’s photos, since film, chemicals and cameras are hard to come by. Forget digital—all those cheap plastic things have been broken and useless since before I was born, and who has those little batteries any more, anyway?

I shouldn’t have stolen the photos, but I want something to remember this place by, in case I don’t make it back here for a long time.

Maybe I shouldn’t have said I sneaked out. It kind of gives the wrong idea. I’m eighteen and free to go wherever I please. Not that age means as much as it once did. When Auntie was my age, she was in college and going on dates. Since the Resource Wars and the outbreak of civil war where I live, a lot of us have had to grow up fast. Already I’ve been a farmer, an orphan, a soldier, and a wife. I barely escaped being a mother. Auntie says it’s no wonder I’m confused, but my life has been no worse than the lives of my friends and in some ways, I think it’s been better.

But lately I’ve been wondering what else is out there in the world. I know I’m letting a lot of people down by running off like this. I would’ve let them down anyway if I had stayed, but they won’t see it like that. They’ll know only that I left, and they won’t understand that it was the only thing I could do.

So today is the start of my new adventure. I’m feeling guilty and excited at the same time, but I'm not afraid. Certainly not of death. Living is a lot scarier.

Should the worst happen and someone find this diary afterwards, please see that it gets delivered to my Aunt Amalia or my husband, Will Channing (yes, the famous one), care of El Cid Academy, Gantlizi Mountain, overlooking the town currently called Estrella, in what used to be called New Mexico, USA. I have no idea what anything will be called when the civil wars are over, so I’m trusting you to figure it out. Or not. I guess I won’t be around to care, will I?

Nice place for a sit down or a hike. Will check back for more later

"I barely escaped being a mother"?

What a world of plot-line that phrase covers.