I woke up early and boiled some coffee for my breakfast, trying to tell myself that this was no different than any of the other times I had done it, except that I was alone. That made it a lot different.

I slept pretty well last night, but there haven’t been too many times in my life when I couldn’t sleep. Will used to say I was like a cat and could sleep any time, anywhere. I think he was just jealous because he suffers from insomnia. Once the sun was up, I did a sketch of the shelter I made last night: 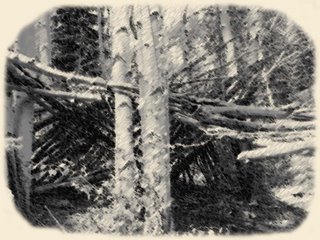 If you look at the mess I drew behind those aspens, you'll see I’ve already taken the tarp off and packed it, but the basic shelter remains. I’ll leave it like this in case anyone comes along who needs it. I slept in a lot of shelters like this when I was with Unitas and we were on campaign. We had tents, of course, but we mostly didn’t bother with them unless we planned to stay in an area awhile. This was especially true in the mountains, where we had to pack lightly. Tents slowed us down.

Today I made my way down the mountain toward the valley. I think of this as the “back” side of the mountain. The other side is the town of Estrella, and I didn’t want to go there and risk running into someone I knew.

As I neared the valley, I came upon a little boy tending some goats. His clothes were too big, which is maybe why he seemed to be all bones, puro hueso. I tied my horse, Flecha, to a tree, and sat down on a rock to visit with him. He said his name was Tomás, which I thought was too serious a name for such a cheerful kid. I offered him some pemmican, and he shared some of his water with me. I needed information about the valley, and he was a gold mine. Although there’s no town on this side of the mountain, there’s a scattered community of little farms and ranchos, and everyone knows everyone else. In fact, as near as I could tell, everyone is related to everyone else, since everyone he talked about was tío, tía, sobrino, or some other kind of relation. It was almost as bad as my own weird family relationships, except that I’m pretty sure Tomás is related by blood to all these people, and not just family by association.

He gave me some good advice about trails the rest of the way down to the valley and said if I went to Tía Paula’s house, his aunt would maybe let me do a few chores in return for a bed and a meal. It sounded good to me, so I gave a little venison jerky to Tomás’ dog and headed down the path. 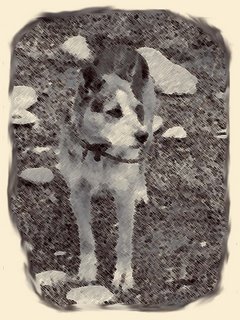 Wow, she really is moving on.